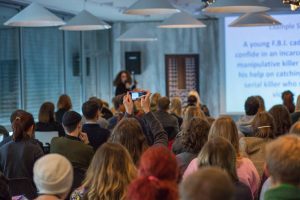 2018 is a celebratory year for the Baltic States as we celebrate our respective 100th birthdays and this spirit of exuberance will be reflected within the sixth edition of the Baltic Pitching Forum. The event is set to take place in Vilnius, Lithuania on 12th and 13th October 2018.  Nine short film projects – three from each Baltic country – will be pitched in front of a panel of invited experts.

The Baltic Pitching Forum has always thrived on preparing a new generation of filmmaker to face the challenges of the future, which includes new forms of filmmaking such as VR and an industry dealing with changing attitudes to diversity and inclusion. It will be done through practical training, with the participants gaining a grounding in pitching which will provide an important skill as their careers develop, and also bringing in a number of industry professionals who will not only provide invaluable advice on the presented projects but also be at the heart of many talks and debates about filmmaking, the industry and the future.

In what is now becoming a tradition for the Baltic Pitching Forum, some former BPF alumni will come back and have a say about their experiences and share some tips on how to get films into the wider world.

At the end of the forum, the international panel will select two projects which will end up with the opportunity of visiting Euro Connection, the pitching forum connected to the Clermont-Ferrand International Short Film Festival, and the European Short Pitch, part of Nisi Masa. Lithuanian Producers’ Jury will select the third best project and award it with 1000 Eur cash prize, this initiative is co-organized with the Creative Europe Desk Lithuania MEDIA office.

The full list of projects and more information on the panelists can be found here.