Only 5 days left until the Baltic Pitching Forum 2017 application deadline.  Lithuanian, Latvian and Estonian filmmakers can apply their short fiction and animation film projects until the 15th of August and have the opportunity to present their works to the fellow Baltic filmmakers and 7 panelists from different cinema industry fields. The two-day training session will be led by a trainer Gabriele Brunnenmeyer (Germany), known for her work with Berlinale Talents, Talent Sarajevo, Maia Workshops etc.

The winners of Baltic Pitching Forum 2016 shared their experience with the forum:

“Pitches are terrifying. YES. But they are also so brilliant, because it is the chance to really get to know your own project, or even to get to know your team,”– said Lizete Upīte, director of the short animation film project “Riga’s Lilac” (Latvia). 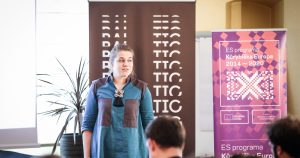 Baltic Pitching Forum together with a fantastic pitching coach gave the chance to go through this step in a non-scary, super-friendly atmosphere. And it was not only the idea that got the attention but also the script. And once you have to show it all, you immediately feel what is right and what is not.

For me, the pitch reminded me of my intentions. I suddenly noticed that while working alone, while cutting and adding the scenes I had lost something very important in the script and I have to get it back. So I am feeling very lucky that I had the courage last August to fill out the application form and just after two months I could return home filled with so needed feedback and lots of motivation.

And, of course – the biggest surprise – the prize – the chance to participate in European Short Pitch where I developed the script together with other amazing young filmmakers. So now I am not alone anymore – I have a script, a producer in France and a co-producer in Latvia. This spring the project got support from French Film center CNC and I can’t wait to jump in the production.

Another winning project – a short animation film “The Juggler” from Lithuania, film director Skirmanta Jakaitė and producer Agnė Adomėnė both agreed that participation at Baltic Pithcing Forum 2016 met their expectations 100%. 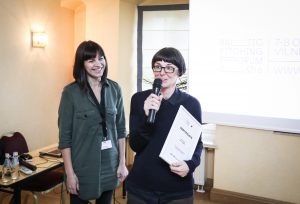 We had an excellent opportunity to present our project for the first time to the public audience and to the carefully selected panel of film industry experts. Forum organizers are doing amazing work by bringing together competent European producers, sales agents, festival programmers and distributors. For us, the participation at BPF’16 was really valuable since we had the opportunity to see our project in a different perspective, we also received a lot of support, positive comments and constructive feedback, and, of course, we had the opportunity to present our project at the European Short Film Co-production Forum “Euro Connection” in France, where we found co-producers. Participation at Baltic Pitching Forum met our expectations 100%!

Baltic Pitching Forum is a unique platform of networking and bringing the newest short film projects from the Baltics into the spotlight. The main goal of the Forum is to facilitate interaction, cooperation and co-production between short filmmakers from Baltics and the rest of the Europe.