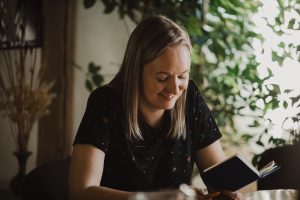 Estonian director and scriptwriter Madli Lääne has studied all over the world: in Estonia at the Baltic Film and Media School, in Germany at the Internationale Filmschule Köln, in Cuba at the Escuela Internacional de Cine y TV and in the US at the University of Texas at Austin. She is also an alumni of the Berlinale Talent Campus.

Lääne already has a number of well-regarded documentaries and shorts on her CV. These include ABC (2012) which premiered at the Berlin International Film Festival and Three August Days (2017), a film which screened at numerous festivals around the world.

Lääne was the first participant of the Baltic Shorts Residency in 2019, and spent three weeks in the Kintai Arts Space in Lithuania during which time she got to work on her short film script whilst being mentored by script expert Wim Vanacker. Her project, Jungle. Law, has already featured in many pitching sessions and industry events such as the 2019 Baltic Pitching Forum and MIDPOINT Shorts.

We sat with Madli to ask her to reflect on her experiences in the 2019 Baltic Shorts Residency, which is currently calling for new applicants for the 2020 edition. This year’s edition will see it invite a participant from each Baltic country with Wim Vanacker holding a three day workshop at the residency’s location followed by several online consultations until the end of the residency.

– What made you decide to apply to the Baltic Shorts Residency?

Madli Lääne: I had been stuck with an unfinished short film script for almost half a year. Funnily enough, I completely rewrote the first half of the script – which I thought was working well – in Kintai, and realised the story didn’t need the second part. That was probably also the reason why the different endings never felt right in the first place — the idea was already complete.

– Tell us about what the expectations you had when you began the Baltic Shorts Residency?

I was super naive and thought three weeks was too long a time to work with a short film script, so I also brought a feature length film idea with me. How wrong I was! I ended up struggling to finish the first rewrite of my short during that time.

In the mornings I took a very – and I mean very – long walk, during which I carried my notebook with me and wrote down some ideas for my script. I believe script writing is 10% writing and 90% thinking — you need time to focus and delve into the world and characters. After lunch I either read (I had brought books about the topic of my script with me) or did some actual writing. I was trying to keep my writing hours short, so I wouldn’t feel exhausted, but feel excited about carrying on the work next day. Twice a week I Skyped with Wim Vanacker, the script consultant of the residency. There were also other artists in the residency, so in the evenings we sat together and relaxed.

– What kind of things did you learn about yourself and your writing when you did the Baltic Shorts Residency and how has it helped you in your career since then?

I realised that I love writing more than I originally thought and that it actually suits me. I had never worked with a script consultant before and was curious about how it would work. Wim helped me tremendously, both creatively and psychologically during the whole writing process. He always made sure I told the story I wanted and challenged me to find unpredictable paths to move from one moment to the next. The collaboration with Wim totally changed my way of writing and thinking about short films. I still felt his influence when I worked on a new project.

– Tell us about your journey with Jungle.Law since then, such as MIDPOINT and Baltic Pitching Forum.

After the Baltic Shorts Residency I continued to work with the script in the script development program MIDPOINT Shorts and pitched the project during the Baltic Pitching Forum. The BPF was very useful for delving deeper into the story — pitching requires you to say out loud why you’re doing a film and what you want to say with it. In a way, it’s very cruel as it clearly points out all the weak moments of your script but it’s an important experience to help you not to get lost on your path and not to forget your goal.

As for the film itself, we got the full funding from the Estonian Film Institute and the Estonian Cultural Endowment and plan to shoot the film this summer. At the moment we are preparing for the shoot and, as we speak, hoping the Coronavirus situation clears itself up soon. We had just started casting when the emergency situation was announced.

– What new things are you currently working on?

During the first week of isolation I wrote another short film script and we are currently waiting for the answer from our funding body. I also started to write my first feature length script this winter – but without the residency and Wim it hasn’t gone anywhere at the moment!

Clear out your schedule and make sure it’s as empty as possible for the residency days, so you can fully concentrate on  your script. Use the expertise of Wim as much as possible and also use your two colleagues for feedback. Breathe the fresh air in Kintai and enjoy the sunsets at the lagoon!

– And what else would you add?

The residency was very well organised and I never felt myself left alone in the middle of nowhere. Many thanks to Rimantė and Gabrielė from Lithuanian Shorts and Audra, Karolina and Martynas from Kintai Arts Residence, who always checked that everything is okay with me. 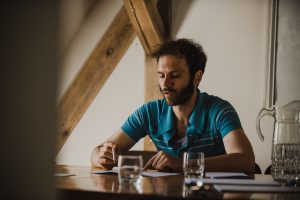 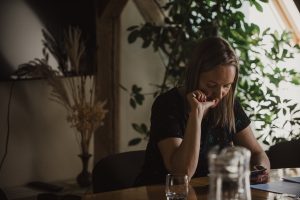 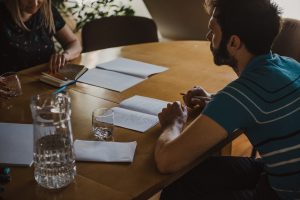 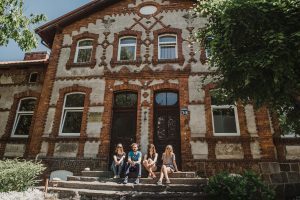