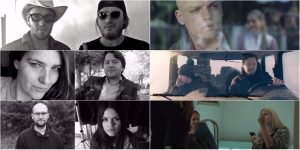 Five years may not seem like a long time, but for many of the alumni of the Baltic Pitching Forum it has been enough time to see films get made, awards won and new projects begun.

Previous participants of the Forum have gone on to win plaudits in the film industry. These include Latvian filmmakers Lauris and Raitis Ābele whose film Castratus the Boar, pitched at the first Baltic Pitching Forum, ended up winning the Grand Prix at the Tampere Film Festival, also Estonian filmmaker Anna Hints held a premiere of her film Ice in Budapest ISFF. This year also saw Lithuanian filmmaker Laurynas Bareiša’s By The Pool, a winner of the 2015 Baltic Pitching Forum, have its world premiere in competition at the Venice Film Festival. In celebration of the fifth anniversary of the Baltic Pitching Forum we will invite these alumni back to talk about their experiences.

3 successful films and 3 different stories will be told on first day of event, October 6th in the open session starting at 1:30 PM:

The session will take place at Contemporary Art Centre (CAC), Vilnius, October 6 starting at 1:30 PM and is a part of Baltic Pitching Forum 2017. More about open sessions on FB.